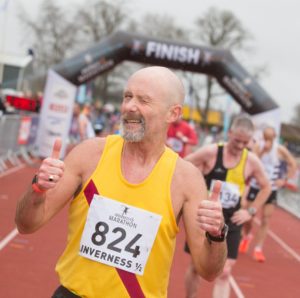 The first ever male winner of Inverness Half Marathon is gearing up to face the event for the 25th time.

63-year-old Graham Laing, who lives in Inverness, will be taking on the Half Marathon on 8th March 2020. Completing the inaugural Inverness Half Marathon in 1985 in a time of 1:04:37, Laing still holds the third fastest time for the event, with the current record being set by Robbie Simpson in 2018 at a time of 1:04:27.

Since the age of 16, Laing has been competing in races around the world, including taking fifth place in the first London Marathon in 1981, with a time of 2:13:59. He represented Scotland at the Commonwealth Games in Brisbane in 1982, where he came seventh in the marathon in a time of 2:14:54. Graham was also part of the Aberdeen Amateur Athletic Club 10 man relay team that broke the world record for running the 850 miles from John O’Groats to Land’s End. Completing the route in 77 hours, 26 minutes and 18 seconds in April 1982.

This year, Laing will face the event for the second time since receiving a hip replacement in 2016. The retiree, who coaches primary school children in athletics for Highlife Highland at Inverness Leisure, is also a coach at Inverness Harriers Amateur Athletics Club. Graham has been helping prepare his runners who are taking on the Half Marathon and 5K on the same day.

Commenting on the event, Graham said: “Although my fast times are behind me now, I’m excited to take on my 25th Inverness Half Marathon! It’s a great course, well-organised and you always have plenty of support from the Highland crowd.

“The Inverness Half Marathon is one of my favourite events and it’s been a pleasure to help others prepare for it and the 5K. I wish all the best to everyone taking part – I’ll see you on the start line!”

Malcolm Sutherland, director of Inverness Half Marathon, added: “It’s a pleasure to welcome Graham back to Inverness Half Marathon for the 25th time and I’m delighted he is inspiring the next generation of runners. The 2020 event looks set to be as popular as ever and I’m sure Graham and his fellow runners will get the Highland welcome they deserve.”

Fancy joining Graham on the Half Marathon, or taking on the 5K? Book your place here. But hurry! Entry for the 2020 Inverness Half Marathon and 5K closes on 18th February 2020, subject to race capacity, and entry sold out early last year due to demand.