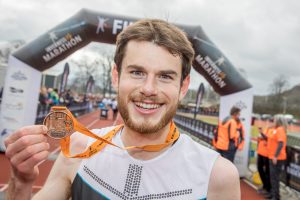 Robbie Simpson showed his preparations for the Commonwealth Games in Australia are well on target by setting a record time in yesterday’s Inverness half marathon which attracted a capacity turnout of 2,800 runners.

The Deeside athlete, who is to represent Scotland in the marathon at Gold Coast  next month, completed the route around the Highland capital in a personal best 1hr 4min 27secs. It’s the fastest time recorded in the 34 year history of the event, bettering the 1:04:32 clocked by Glasgow’s Peter Fleming in 1993.

Dundee-based Welsh international Kris Jones, who won the Scottish cross country title a fortnight earlier, made a determined bid to stay with Simpson but was unable to match the Banchory athlete’s sustained fast pace over the final third of the race.

Jones finally had to settle for second position in 1:04:58, a time which would have been good enough to win in any other year other than 1993.

Simpson, who returned a few days earlier from a short training break in Barcelona, was delighted with the outcome. He said: “That’s the best race I’ve had for a long time. I felt I have trained well all year but the races haven’t gone well until now. I did a brilliant session of repetition miles when I was in Barcelona last week and it was probably the best I have ever done, so I came here feeling confident

“I felt decent from the start and it was great to have Kris there.I knew it would be hard to beat him as he was testing me early on but I just kept pushing away and my legs felt great.

“I felt a little tired around the six mile point but it didn’t last long and I was able to push on. I eventually got a little gap and from about the eight mile mark I was pulling away. When I turned at the Ness Bridge with about two miles to go the wind was behind and I felt I was flying.

“I realised I could get a personal best time and when I got onto the track I heard I had 30secs to get it, so I just sprinted as fast as I could.

“It’s a real boost to get this performance just before heading to Australia this week. So I can take a lot of confidence from it because I felt so good.” 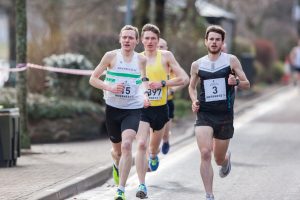 Cameron Milne (Central AC) finished third in 1:07:21 while fourth placed John Newson, 1:08:51, picked up the Graeme Moffat Memorial Quaich as the first Inverness Harriers club member to finish. He also won the Scottish North District title and led his club to the team prize with backing from Donnie Macdonald, seventh in 1:11:46 and Gordon Lennox, eighth in 1:12:15.

Kirkcaldy’s Derek Rae, who preparing for next month’s London marathon in which he’ll represent Great Britain in the World Para Athletics Cup, was a few secs outside his best when recording 1:10:27 for sixth position.

McIntosh’s time was the quickest she has recorded from her five appearances in the Inverness race. Jennifer Elvin (Metro Aberdeen), winner of the San Francisco half marathon earlier in the year, was third in 1:21:08, which is just 15secs slower than she ran in California.

White was pleased with her performance, which represented a 54secs improvement on her previous best set when winning at Alloa last year.

She said: “This is the first time I have run here and it exceeded my expectations. It was a perfect day and I really enjoyed it. I led all the way and I had no idea how close the next woman might have been as I kept my head down and kept looking ahead.

“I’m doing next month’s Manchester marathon when I hope to improve on my best time of 2:42 which I set at London last year. Hopefully, after this result, everything is on track for that. I’ve no more races before Manchester so it’s a case of getting some more training done.”

Race Director Malcolm Sutherland was delighted that Robbie Simpson had broken the long standing event record but was equally pleased that so many other runners enjoyed the occasion. He said: “It was fantastic that Robbie produced such an outstanding performance and he can now set of for the Commonwealth Games in confident mood. The crowd at the finish really enjoyed watching and gave him a rousing reception.